After careful consideration of the overall situation involving the corona crisis, the most recent directives and recommendations from the Austrian government, expert opinions as well as our own sense of personal responsibility towards our guests and partners, we feel we are unable to stage Wiener Wiesn 2020 in its customary form and must therefore cancel this year’s event with a heavy heart. Our 10-year anniversary will be postponed until 2021.
Nonetheless, we are not going to let Wiener Wiesn 2020 disappear off the radar completely. Instead, we will bring Austria’s biggest folk-heritage festival directly to you, our fans and guests, in your own home – in the form of a digital experience that will be known as “WIESN #dahoam” – the first event of its kind in all of Europe.
As sad and painful as the cancellation of Wiener Wiesn 2020 was for all of us, due to no fault of our own and something utterly unimaginable just a few weeks ago – we will do everything in our power to bring you a cool digital event in 2020, the Wiener WIESN #dahoam, before returning to the Kaiserwiesn in 2021 for celebrations that are sure to be bigger and better than ever before.
Complete information and news can be found as usual on our website, on Facebook and in our
newsletter.
We really look forward to seeing you again soon!
Your Wiener WIESN Team 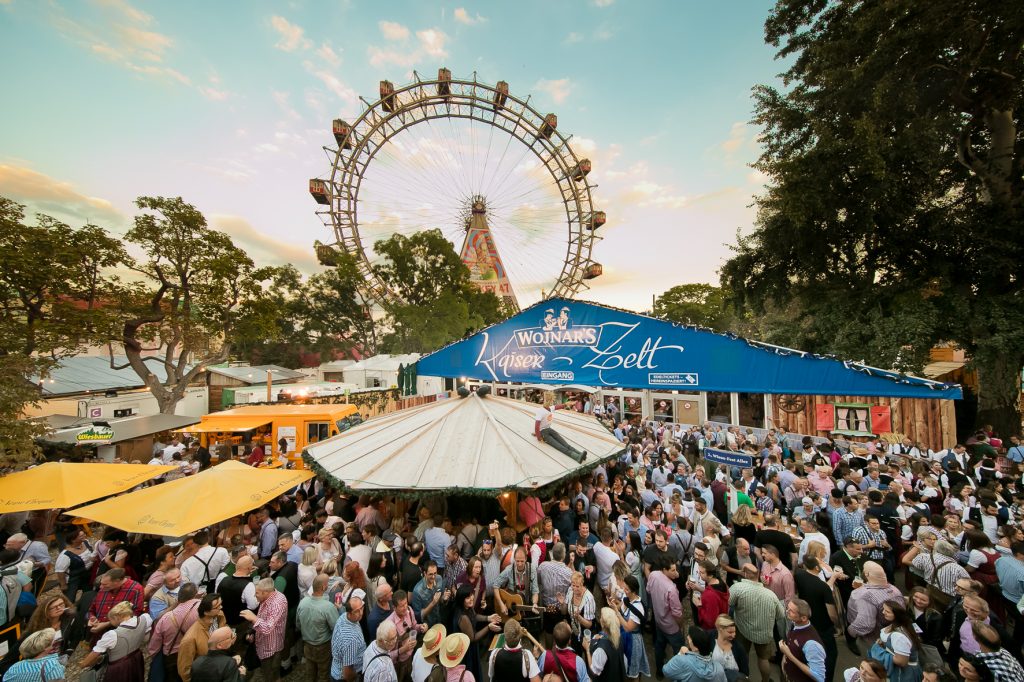 Listening to live music and celebrate the evenings

The WIESN-Village
Free daily entry opening at 11.30 am free entry

The three Tents
“Frühschoppen” and afternoon concerts
daily from 11.30 am to 5.30 pm free entry

Special Days: our Federal state days and other theme days

Unfortunately, we aren’t going to be able to celebrate the 10-year anniversary of Wiener WIESN in the traditional way. Be that as it may, the organizers are now proud to invite you to join us for Europe’s first-ever virtual Wiesn – the WIESN #dahoam via web browser, social media and webcam. And thanks to the “WIESN #dahoam Box”, no one will have to miss out on authentic folk music and those irresistible culinary treats either!
Tradition always takes center stage at our Wiener WIESN celebrations. That said, typical Austrian specialties and an array of musical tidbits are also integral to the whole experience. On Saturday, 12 October, Styrian folk traditions were the focus of festivities – featuring folk dance groups along with delicious regional foods and refreshing beverages.

The “WIESN #dahoam Box”
Of course, we don’t want you to have to go hungry or thirsty just because you happen to be enjoying the event in front of your electronic device this year. “We are working intensively to put together a “WIESN #dahoam Box”, stuffed with all kinds of items including the original Wiesn beer glass, beer, spreads, bread, the WIESN frankfurter, mustard, horseradish and much more, so that our loyal fans get to celebrate a traditional Wiesn evening within their own four walls at home. Feldhofer: “Unusual times require unusual ideas. I am convinced that we will come out of this crisis and return to social normalcy as a much closer community. Then, we will be able to celebrate the 10 th anniversary of Wiener WIESN in its originally planned form in 2021. The “digital WIESN” and the “WIESN #dahoam Box” aren’t merely intended to shorten the wait, they are also important steps in the direction of normalcy and togetherness in these extraordinary times”, continues Feldhofer.

Wiener WIESN: a folk festival with a rich tradition
Munich has its Oktoberfest, Vienna has the Wiener WIESN: Every year since 2009, this huge celebration of Austrian folk traditions has drawn over 400,000 Austrian and international guests to the Vienna Prater to enjoy 200 individual concerts and a live program spanning 900 hours. “Especially in the era of globalization, people need more regionality and a greater sense of their own heritage than ever before”, points out Christian Feldhofer, explaining the idea behind Wiener WIESN. Here, every age group will find something that appeals. Old and young, big and small, laid-back guests and party animals all become better acquainted with the appealing genuineness and deep roots of authentic Austrian folk traditions.
Feldhofer continues: “Here, everyone gets to enjoy typical Austrian folk customs, typical Austrian music and typically delicious Austrian foods!”